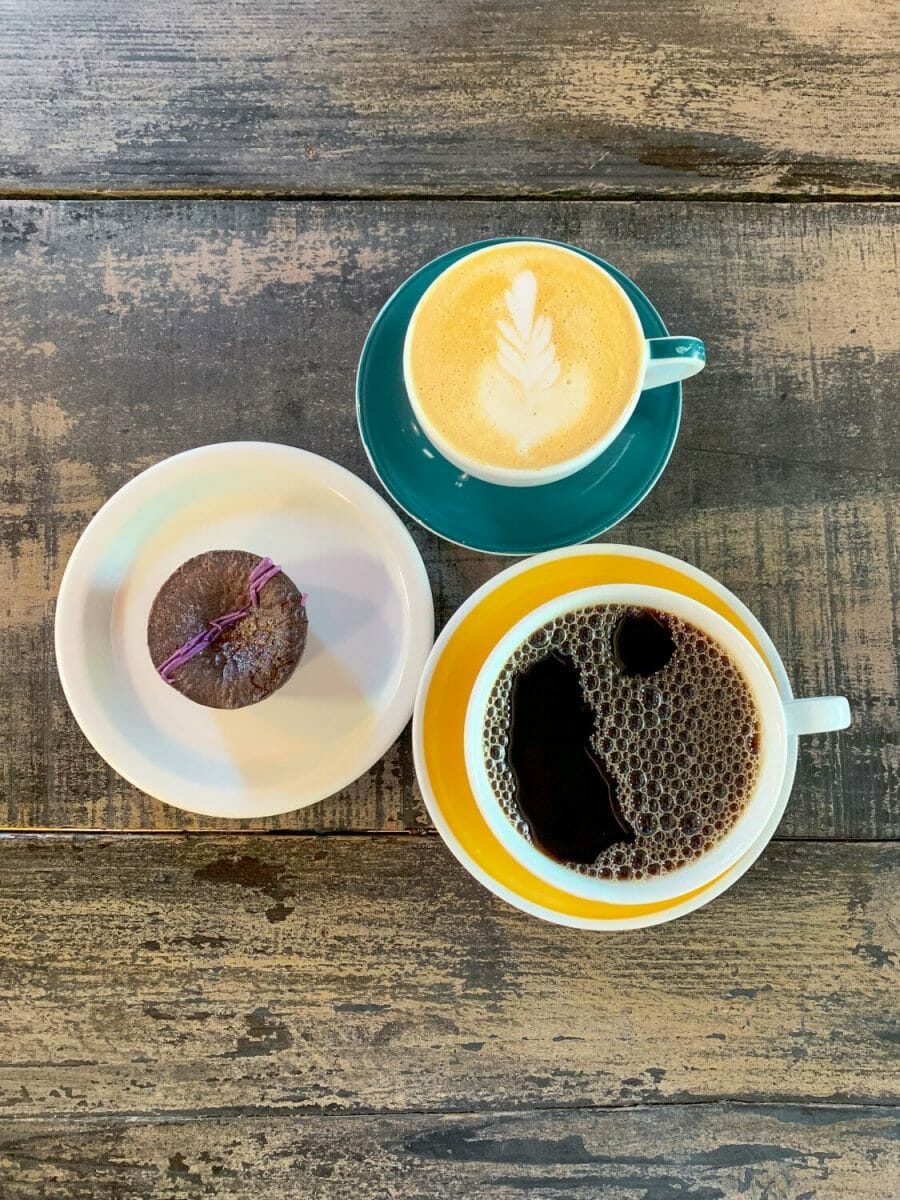 While San Francisco’s coffee scene is well known, there are plenty of great East Bay coffee shops, too. Oakland and Berkeley have tons of coffee shops on their own, but the East Bay is much more than these two cities. So, allow me to introduce a few more.

For this East Bay coffee guide, I’ve made a point to emphasize lesser known cafes and locations. I’ve designed it so that you can either try different places one at a time, or choose 2-3 and make it into a day trip around the East Bay.

What sets Red Bay Coffee apart—besides their high-quality coffee—is their emphasis on diversity and inclusion. As an African-American owned business that aims to attract people usually left out of specialty coffee, Red Bay is at the forefront of social change in coffee.

This combination of specialty coffee and social inclusion is helping them stand out in area with a lot of coffee options. They have expanded to a new HQ in downtown Oakland and have opened a new location in the San Francisco Ferry Building.

I’ve only visited the coffee box, which is a shipping container outside a co-working space, but their new HQ looks amazing.

Artis is a unique cafe in Berkeley that specializes is fresh, roast-to-order coffee beans. They have a special roast bar where they roast a wide range of beans one pound at a time. So, if you want extremely fresh coffee to take home, this is a great place to stop by.

As for the cafe itself, you can try a wide range of coffee and pastries in their modern cafe with high ceilings and windows. The space isn’t huge, but there’s a decent amount of seating both inside and outside. So, if the weathers decent—which it usually is—you’ll probably be able to find a spot.

They also feature a good retail section with all kinds of various coffee brewers, grinders and other gadgets. It goes well beyond your usual cafe gear.

Another great East Bay coffee roaster is Highwire Coffee. They started off in Oakland, but have slowly expanded all around the East Bay. While reading through the backstory, I was surprised to learn that 2 of the 3 founders have backgrounds in cupping and tasting going all the way back to the 1990’s. That certainly explains why I’ve even been impressed by their basic batch brew coffee.

They have a handful of cafe’s, but I think the most distinctive one is in Albany—right next to Berkeley. It’s a small coffee cart inside of an outdoor flower shop. There’s limited seating, but a lot of atmosphere. The Berkeley cafe is my favorite for actually sitting. (I also recommend you try Acme Bread down the street).

If you venture further out into the East Bay, you’ll find States Coffee, located in the city of Martinez. States roasts their coffees on site and also bakes their own bread and pastries.

The original Martinez cafe is in a large brick building in the well-preserved downtown of Martinez—a small city along the water. The cafe is divided into two different rooms for seating with the roaster on full display in between them.

States Coffee is in the midst of an expansion into Oakland and Berkeley, so there are plenty of ways to try their coffee and pastries. However, if you can make it Martinez, I recommend you check out the original location.

Just East of Martinez is Walnut Creek, where you’ll find Bondadoso (“kind” in Spanish). They are a multi roaster coffee shop that has both a cafe and a retail section. (They also specialize in tea in case you have a friend who doesn’t like coffee).

There are all the usual cafe drinks, including pour overs from their rotating coffee options, and the barista’s are noticeably friendly. The cafe space is about medium sized, with both indoor and outdoor seating and the retail space has a lot of coffee gear in case you want something new.

Coffee around the East Bay

If you’re visiting the Bay Area—or moving there—don’t neglect the East Bay. These different coffee options should get you started exploring the local coffee scene. Most other coffee guides just focus on Oakland and Berkeley, so I’ve tried to give you some options further out.

If you have the time to check out all the cafes I mention—or even 2-3 of them—you will get to explore a large part of the East Bay. One final note, I highly recommend you visit Grizzly Peak and the surrounding mountains either before or after your coffee. There are fantastic views of the entire Bay Area and plenty of places to hike!