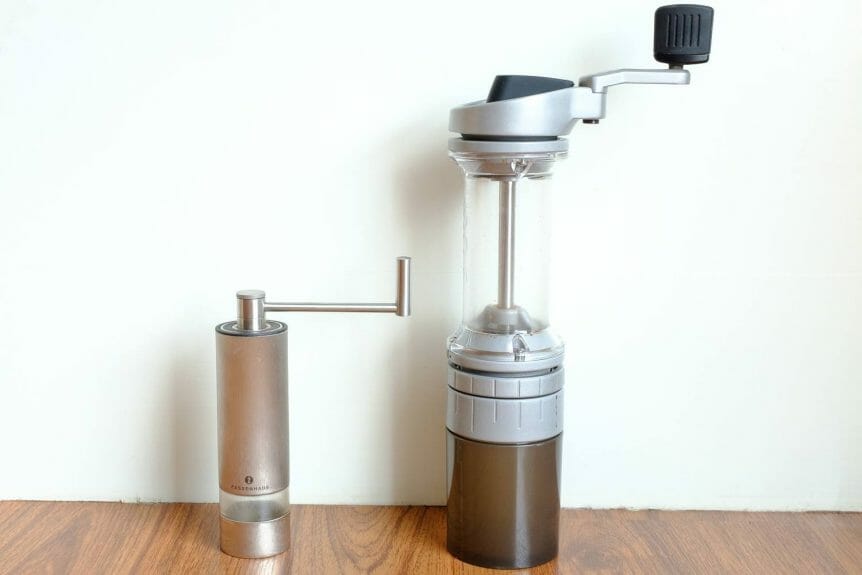 Last Updated on June 7, 2021 by smiling-coffee-snob

If you’re reading this article, I assume you’ve already decided to get a manual coffee grinder, but aren’t sure which one to get.

I know it can seem overwhelming to choose when there are so many similar ones out there. But, here’s the good news: while there are a lot of manual coffee grinders available, the number of good grinders is much, much smaller.

To start things off, I’ll give you my top recommendations for a few different types of coffee drinkers. Then, I’ll go into more detail about manual coffee grinders so you know how they work and what’s most important.

(Disclaimer: I DID NOT receive any of the recommended grinders for free. I bought those I’ve personally used and the others are recommended based on research. However, the links in this post are affiliate links so if you buy through the links I receive a small commission at no extra cost to you.)

The best hand grinders for espresso

Just a fair warning, grinding for espresso is usually a lot of work with a manual grinder. The lighter your beans, the more of a challenge it’s going to be. Never-the-less, it’s totally possible and many people do it. But, you’re going to want a grinder at the higher end of the spectrum to get good results.

If you’re still up for the task, I recommend either the Lido E-T or the 1ZPresso JX-Pro. (If you’re curious about the Lido grinder, check my full review).

Manual coffee grinders are all fantastic for travel since they are portable and don’t need electricity. The main consideration are how small you want to go, what your budget is and whether you want a separate grinder only for travel.

Personally, I think that the 1ZPressoo Q2 is the best travel grinder right now, but if you want something more basic or a separate travel only grinder then the Hario Mini Slim Plus is a good alternative.

If you want just a simple manual coffee grinder to use occasionally or just don’t want to spend too much money on a coffee grinder, there are some decent options out there. But, be aware that the difference between the higher priced options is very noticeable.

You should expect much longer grind times and a less consistent grind. That being said, you can still get decent results with these grinders. As far as budget hand grinders are concerned, I recommend one of these Harios. Both have been recently updated

What to look for in a manual coffee grinder

While grinding seems simple enough, you don’t just want to grind coffee beans into smaller pieces. You want to grind them into pieces that are all the same size… or as close as possible. Uniformity in size is why you get an awesome cup of coffee when you use a good grinder (assuming you have good beans and brew them properly).

No grinder is going to give you a perfectly consistent grind, but the good ones are dramatically better than the bad ones. As a bonus, they also grind much faster and require much less effort.

Here are the main factors to consider:

A lot of cheaper grinders emphasize that they use ceramic blades and how much better they are.

They’re just cheaper to mass produce. To make ceramic blades, you first create a mold to shape the burrs and then reuse that mold for future sets of burrs. The mold is expensive, but once it’s made, ceramic burrs can be mass produced for a much cheaper price than steel.

Personally, I think steel is much better for a manual coffee grinder. I’ve found that grinders with steel blades grind much faster with less effort and produce a more consistent grind.

The quality of materials will make a huge difference in how your grinder performs and how long it lasts. As I mention near the bottom, there are lots of cheap grinders out there, but most don’t perform very well and don’t last.

Of course quality usually raises the price, so you’ll have to balance this with the other factors mentioned.

There are two important sizes to keep in mind. First, there’s the burr size. Larger burrs will usually grind faster than smaller ones. There’s also the size of the grinder itself.

Smaller grinders are more portable, but if you’re making coffee for more than 1-2 people they aren’t very convenient. You often have to take off and reconnect both the top and bottom multiple times, which can be tedious to do daily.

Large grinders are just the opposite. They can grind more beans at one time but aren’t as portable.

What exactly is a burr?

Rather than a single blade, a burr set consists of two pieces, usually made of steel or ceramic, that have multiple blades built into them. Beans are crushed between these two pieces.

In a manual grinder, you’ll turn a handle that turns a shaft that’s connected to one of these pieces. The more this burr moves back and forth during grinding, the less consistent your grind is.

The challenge is holding the center burr steady during this process. The best grinders will have a second metal piece at the bottom which stabilizes the burr while grinding.

My quest for the best manual coffee grinder

I started with a highly rated, but low-priced hand grinder. It did a decent job but didn’t last long. After it broke within a few months, I decided to replace it with a higher quality grinder.

I chose the Zassenhaus Panama, pictured below, and it’s still going strong after two years. Unfortunately, this has become pretty difficult to get a hold of. I recently switched to the Q2 by 1ZPresso, which is very similar in design, but even better in performance.

I also tried the Handground, but had mixed feelings about it. The large capacity and some of the design features were nice, but the grind quality was a little below the Zassenhaus and I expected higher quality materials. Plus, it was slower. Much slower.

Ultimately, I decided to return the Handground for the Lido E-T. It was a big jump in price, but it’s an awesome grinder that produces a much more consistent grind with less effort than the others. Four years later it’s still going strong.

The Q2 has become my go to travel grinder. It’s small, portable and produces a very consistent grind. It comes with a handy travel pouch and is made to fit inside an Aeropress. I’ve also been really impressed with the quality of materials and the ease of grinding. It’s one of the easiest, smoothest hand grinders that I’ve ever used.

But, its biggest strength is also its biggest weakness. The small size means that it doesn’t hold very much coffee. So, if you want to grind more than a single cup it’s going to require multiple grinding sessions.

The Lido is widely considered one of the best manual coffee grinders available. It grinds just as consistently as much more expensive electric grinders, it’s built with high-quality materials, and its capacity is higher than most other manual coffee grinders. Also, you can replace parts that wear out rather than buying a whole new grinder.

But, the Lido is also big, heavy, and expensive. It weighs about 1 kilo, or just over 2 lbs, and when it’s fully assembled it’s about the size of a wine bottle. It’s not the easiest to use in the beginning, either. Changing the grind size requires adjusting two different rings and you have to make sure they’re neither too loose or too tight.

This would be in the top of the line category when it comes to manual coffee grinders, so it’s a lot more expensive than your average hand grinder. But, if you want a fantastic grinder and can deal with the size and learning curve it’s a great option. Be sure to check my full review for more info about the Lido grinder.

A warning about cheap hand grinders

There are an overwhelming number of cheap hand grinders on Amazon that look nearly identical. Most of them wildly exaggerate to make you think they’re just as good as a quality grinder, but at a much better price. They’re not.

You can try one for yourself, but I’ve had bad experiences with them and I’ve read hundreds of bad reviews from other disappointed customers. That’s why I recommend that if you want a budget grinder, it’s best to stick with the Hario’s that I mentioned. While they don’t perform as well as the others, they are reliable budget options.

Choosing a good manual coffee grinder can be overwhelming. There are so many options and you really won’t know how well each will perform until you use it.

I’ve tried to keep my recommendations short to simplify the process as much as possible. A good coffee grinder can take your home brewing to a whole other level.

If you need help with the brewing part, here’s something to get you started.