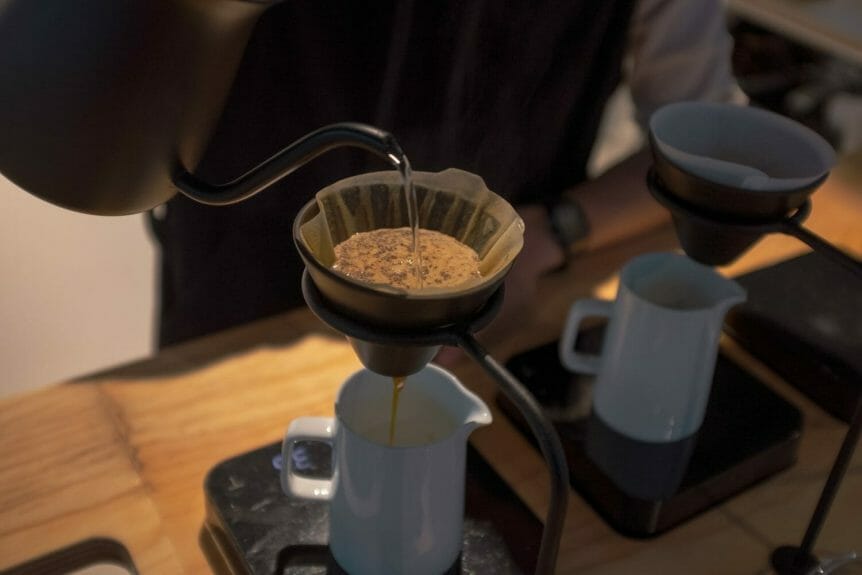 Coffee in Japan is fantastic. Coffee shops, brewing equipment, and coffee beans are so readily available that you’ll be overwhelmed with drinks to sip and the best equipment to brew it yourself.

In this article, I’ll tell you to what makes coffee in Japan so unique, introduce a few coffee brands, and give you an overview of coffee styles unique to Japan.

Lets start with the equipment.

Most of the best coffee equipment is from Japan

I’ve introduced pour over coffee in a previous article and recommended two brewers, the Hario V60 and the Kalita Wave. Besides being great brewers for hand drip coffee, both are made by Japanese companies.

In fact, while Italy is the heart of espresso culture, Japan is the heart of hand drip coffee culture. Traditional coffee shops have been brewing this way for decades, so much of the best equipment comes from Japan.

Hario and Kalita are the two biggest brands, but there are many smaller ones right alongside them. Pouring kettles, which you’ll see in any cafe serving pour overs, are often Japanese. Hario and Kalita are the big two, but even many specialty brands like Takahiro (which many consider the best coffee kettles in the world) are from Japan.

Why so much coffee equipment comes from Japan

Devotion to your work is a huge part of Japanese culture. While much of the world is moving away from specialization, Japan is not—at least not as much as other places.

There’s a level of specialization in Japan that would not work in many other parts of the world. As anyone who’s seen the movie, “Jiro Dreams of Sushi” knows, many people devote their lives to perfecting one thing.

The same is true of coffee. Whether it’s brewing equipment, roasting beans, or a coffee shop this focus on craft leads to amazing results.

The traditional Kissaten are the perfect example of this devotion. While Japan has modern coffee shops that are similar to the best third wave coffee shops in other parts of the world, if you love coffee, you’ve got to try coffee from a Kissaten… or many of them.

Kissaten are traditional Japanese coffee shops that go back nearly a century. You should expect a near obsessive focus on quality and an owner that has devoted his/her life to the craft. Each place will have its own style of coffee brewing and devoted following of regulars who love it.

Take Cafe de L’Ambre, one of Tokyo’s oldest and most famous coffee shops, as an example. The owner lived to 103 and was obsessed with coffee until his death. He would slowly roast beans by hand and serve coffee using a nel drip.

The traditional nel drip is nothing like the modern pour over. A cloth filter that looks like a fishing net is filled with coarsely ground coffee and water is slowly dripped over it for 5-7 minutes—sometimes as much as 10!

Coffee in Japan: How the atmosphere is different

It’s not just the coffee that stands out, but the whole vibe.

Step inside one of these classic cafes and you’re surrounded by wood and coffee beans. Imagine a cozy space with a wooden bar, traditional furniture, and many older clients sipping coffee and smoking (they’re one of the few places where people still smoke inside).

There will usually be a waiter in a perfectly pressed uniform and a menu with many bean options. Or, it may be the casually dressed owner serving everyone. The coffee is usually priced high, but the quality and atmosphere are spectacular.

The third wave is alive and well in Japan

At the same time, this historic cafe culture doesn’t mean that there’s nothing modern. Quite the opposite. You’ll find just as many third wave coffee shops as you will in other parts of the world. In fact, third wave coffee has been heavily influenced by Japan.

If you’re from the US, you’ve probably heard of Blue Bottle Coffee, but what you may not know is that much of the concept is based on the Japanese Kissaten. The owner was inspired by Japanese coffee culture, especially places like Cafe de L’Ambre, and has utilized a lot of what he learned from Japan.

Interestingly, coffee culture was dying in Japan and Blue Bottle has helped revive it. They actually have multiple locations in Japan now…

If you’re not already interested in Japan, hopefully this article has at least piqued your curiosity. If you ever get a chance to visit I highly recommend it. It’s not just the coffee culture that’s amazing. The history, nature, and food culture are just as incredible.

If you’re interested in brewing, checked out my introduction to pour over coffee. I’ll help you get started brewing the best coffee of your life and I’ll continue adding more in-depth articles in the future.

P.S. If you’re interested in Japan, I have a site about food and travel in Japan that I run with my girlfriend…