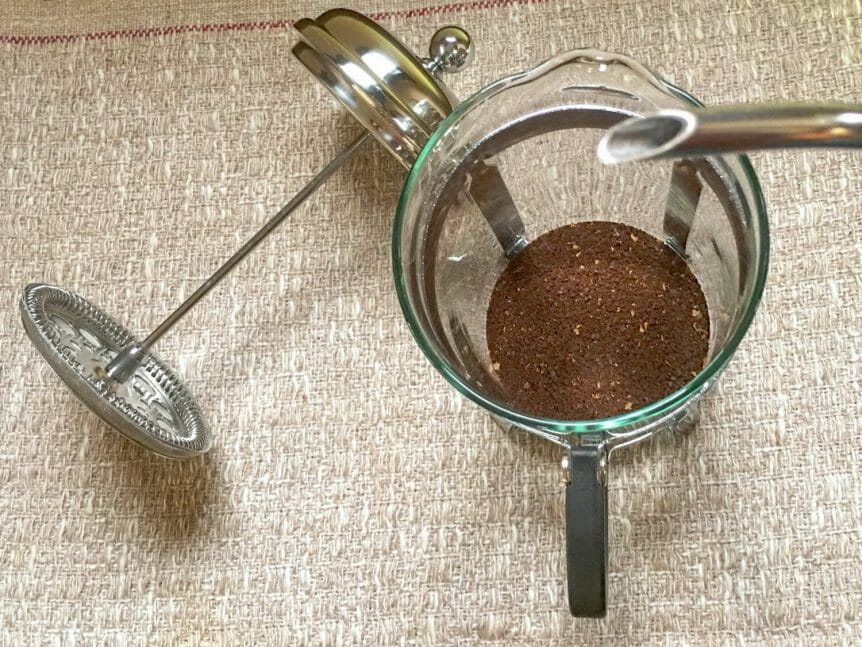 The first time I laid my eyes on this beautiful contraption was about ten years ago at Urth Caffe in Los Angeles.

Rather than the more practical option used by most American cafes—a giant metal container with a plastic spout at the bottom—they brought to my table a small personal press-pot filled with freshly ground coffee, hot water, and a timer. On the side there was a small ceramic cup. They told me to press down on the plunger when the timer hits 4 minutes and pour it into the cup.

Why the french press?

You probably have your own story of when you first tried french press coffee. It’s so different from standard drip coffee, yet so simple and elegant. When brewed right, the french press can bring out incredible flavors from coffee beans that most other brewers can’t match. Plus, it does it with so little effort…

This magical combination of taste and simplicity are the result of two things: Coarsely ground coffee and a metal filter.

Large pieces of coffee extract slower than small pieces, so french press coffee is a slow-brewing coffee. This slow process also has another advantage. Many unpleasant flavors that come out when coffee is brewed for too long require really hot water in order to extract. Slowing down the brew time cools the water before it’s able to extract this bitterness.

The french press also uses a metal filter, rather than a paper one, which maintains the coffee oils and creates more body in your final cup. For a closer look, be sure to check out my other article comparing french press vs pour over coffee.

French presses come in a variety of different sizes, but the most common are the smallest one, which makes 1-2 cups, and the large, which makes 3-4 (assuming an 8-12 oz cup).

You can always just get the big one and put less water in it, but if you generally make coffee for 1 or 2, I recommend getting the smaller one. That way you can just fill it all the way up, rather than measuring the right amount of water.

The biggest difference between a french press and other coffee makers is the grind size. Generally speaking, you want something as coarse as bread crumbs, but that’s just a general rule of thumb.

The coarser the grind, the longer the brew time. You should experiment with different levels of coarseness and brew times to find what works best for you.

Two things to keep in mind:

1.) It’s very difficult to get an evenly coarse grind without a high-quality burr grinder. Basic grinders will give you a mix of large and small pieces which will affect the taste.

If you don’t have a great grinder, a mesh filter can help. You just need something with holes small enough to filter out sediment without letting the regular grounds fall through. A tea basket works well.

2.) Even with a nice consistent grind, there’s going to be some sediment at the bottom. This can give the coffee more body and texture, but some people hate it.

If you hate sediment you can get rid of it, but it involves an extra step—running the finished coffee through a paper filter. This kind of defeats the purpose of using a french press, but if you really hate sediment at the bottom of your cup it will help.

No matter your grind setting, the french press steeps slower than other methods. Rather than 2:30 – 3:30 minutes, you’re going for 4 – 6, some people even go as long as 8 minutes.

Let’s start with the standard method and go from there.

Grind coffee to the consistency of breadcrumbs. As with other brewing methods, the ideal coffee to water ratio is generally between 1:14 and 1:16. I generally use 60g of coffee for a large size french press.

1.) Heat the french press and your mug with hot water and toss the water.

2.) Add your ground coffee to the heated french press and fill it halfway with water.

3.) Put the lid on and press the filter just above the water without touching it and wait 30 seconds.

4.) Stir with a wooden spoon (metal may damage the glass).

6.) At 4 minutes, slowly press down the plunger and serve immediately.

The above is just the generic brew method that most recommend to simplify your first time with a french press, but the beauty of this method is how much you can customize it.

Using the same brew method, experiment with different times, ratios and grind sizes to see what you like best.

If I’m filling a large, 32 ounce french press I use 50-60g of very coarsely ground coffee steeped for 6 minutes. 60g will make it pretty strong, but sometimes that’s just what I need.

Have you experimented with different times and techniques or do you just stick to the basics?